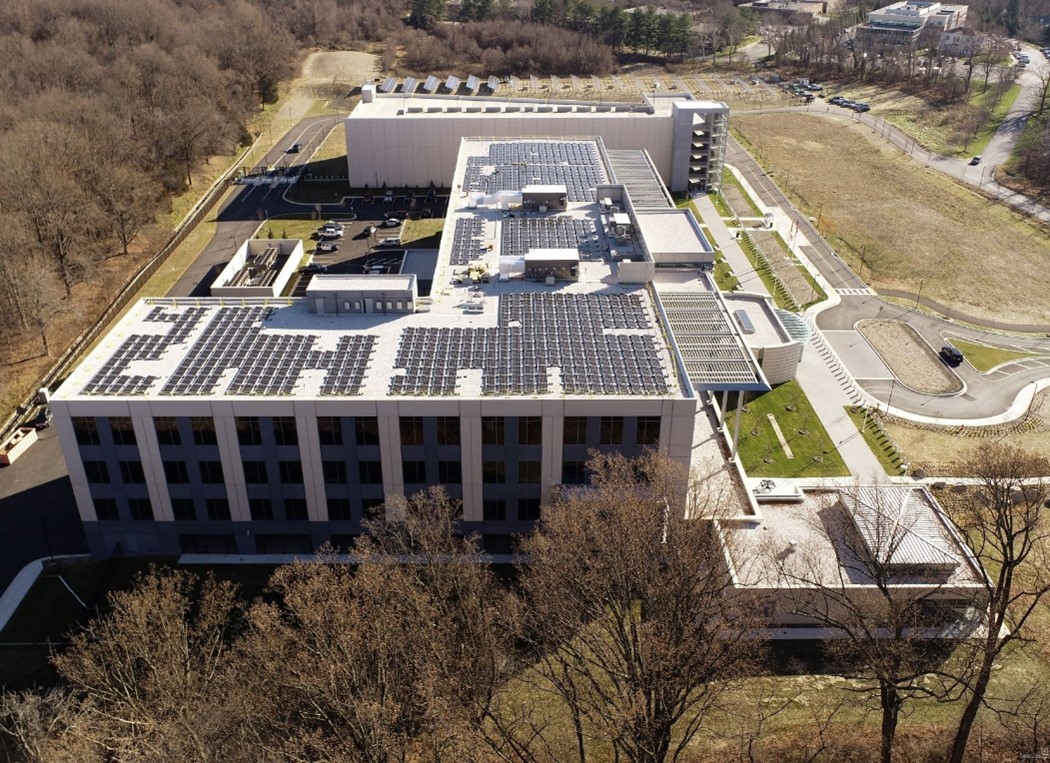 In 2020, Howard County entered into the largest and most innovative solar Power Purchase Agreement (PPA) in the state of Maryland. By aggregating rooftop, parking lot, and ground-mounted projects into one agreement, Howard County was able to meet multiple needs while keeping the cost of electricity down – even saving money from its already low group purchase rate. The combined anticipated cost benefit to the County over the 25-year life of the contract is more than $1.5 million.

When complete, the combined projects will generate a monumental 44 million kilowatt-hours of electricity each year. This will provide at least 60 percent of the County government’s electricity usage and provides a GHG emissions equivalent of taking nearly 7,000 cars off the road. The combined projects will include eight installations on County properties, including two solar canopies over parking, numerous rooftop installations, and ground mounted projects on public and privately-owned sites.

Several other jurisdictions and agencies, including Howard Community College, have used Howard County’s PPA model to begin implementing their own solar expansion programs.

For more information on the solar PPA, please see the following press releases and articles: 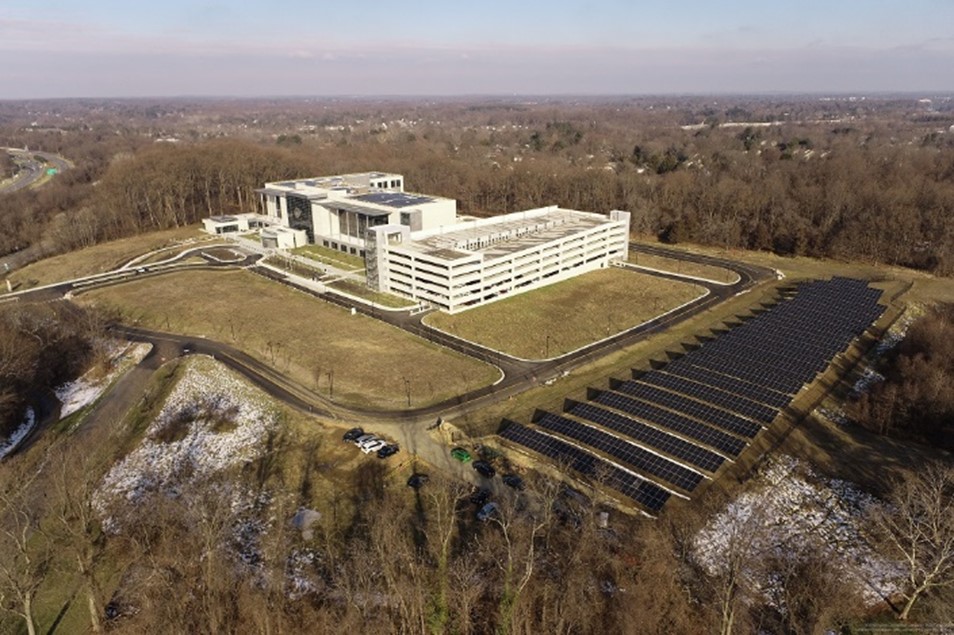 Howard County’s new Circuit Courthouse in Ellicott City, MD receives nearly 60 percent of its power from the sun. This project helped the courthouse achieve LEED Gold status. It includes solar on both the roof and in a field adjacent to the courthouse. A native plant meadow for pollinators is planted under and around the ground-mounted solar array.

The arrays are nearly 800 kW, with a combined annual generation of 1,121,580 kWh of electricity. That clean energy reduces GHG emissions equivalent to taking 105 cars off the road or planting more than 8,000 trees.

The project was completed in July 2022.

Find photos, video and the press release of the ribbon cutting ceremony here.

Find live updates on the solar generation of this project here. 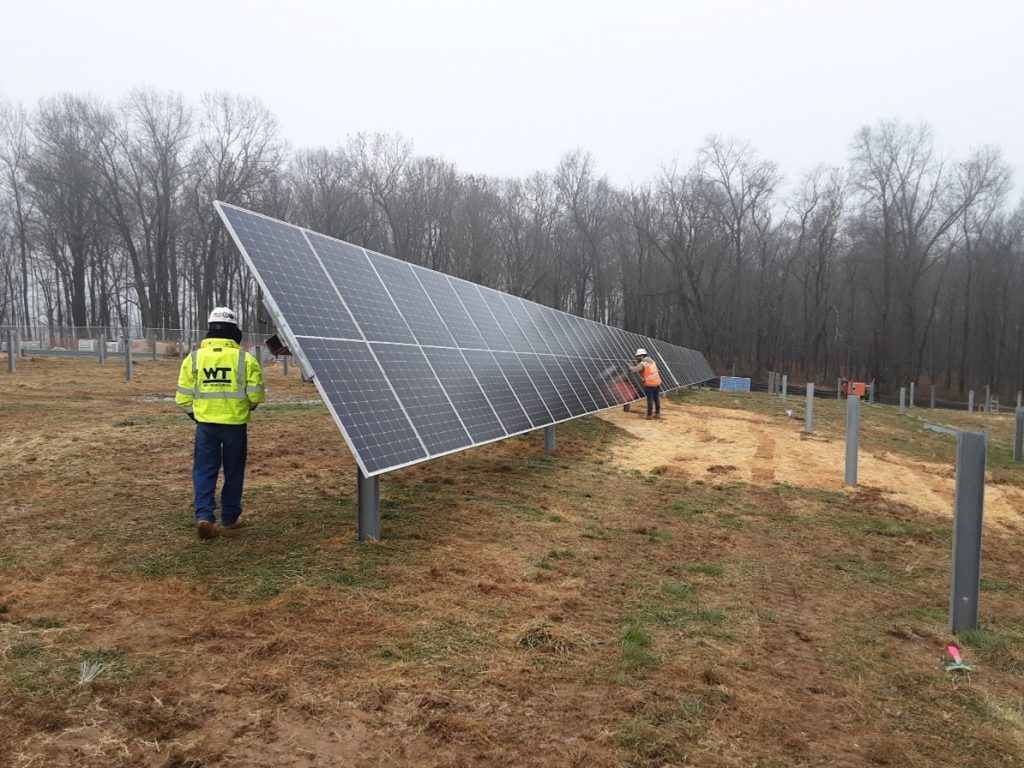 This solar project contains ground solar panels at a privately owned site that is located in West Friendship, MD. The solar arrays are mounted on single-axis trackers. This means that they change their position throughout the day to maximize the amount of sunlight reaching the panels and the amount of energy generated. Sheep grazing is planned under the panels. This is a great co-use of large solar arrays due to sheep being able to graze and get shade throughout the day while keeping the grass trimmed below the level of the panels. The perimeter of the solar arrays not being used for sheep grazing will be planted with native pollinator habitat.

In total, the solar arrays installed at Triple Creek Farm have a capacity of nearly 8.3 megawatts and will generate approximately 13.7 million kWh per year of electricity. The solar array system will reduce GHG emissions equivalent to taking 1,282 cars off the road or planting nearly 98,380 trees.

Construction was completed in September 2022. 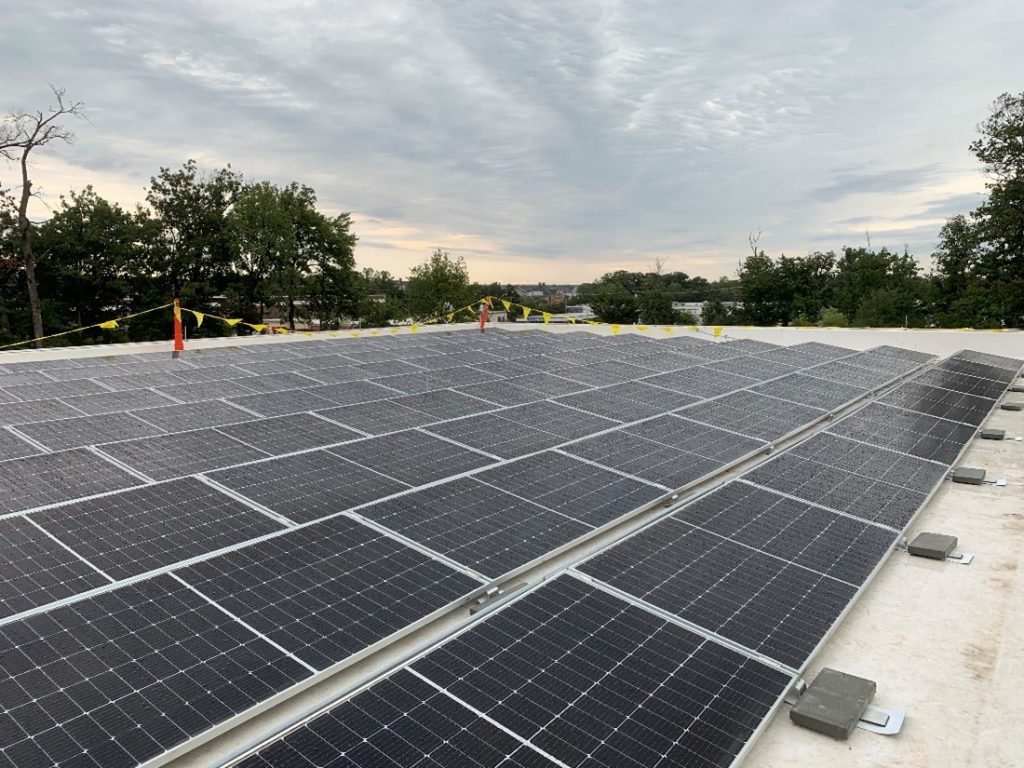 This is a solar rooftop project at the Waterloo Fire Station in Jessup, MD.

The solar arrays are 84 kW in size and will generate approximately 104,974 kWh per year of electricity. The solar panels will reduce GHG emissions equivalent to taking nearly 10 cars off the road or planting 751 trees.

The project was completed in October 2022. 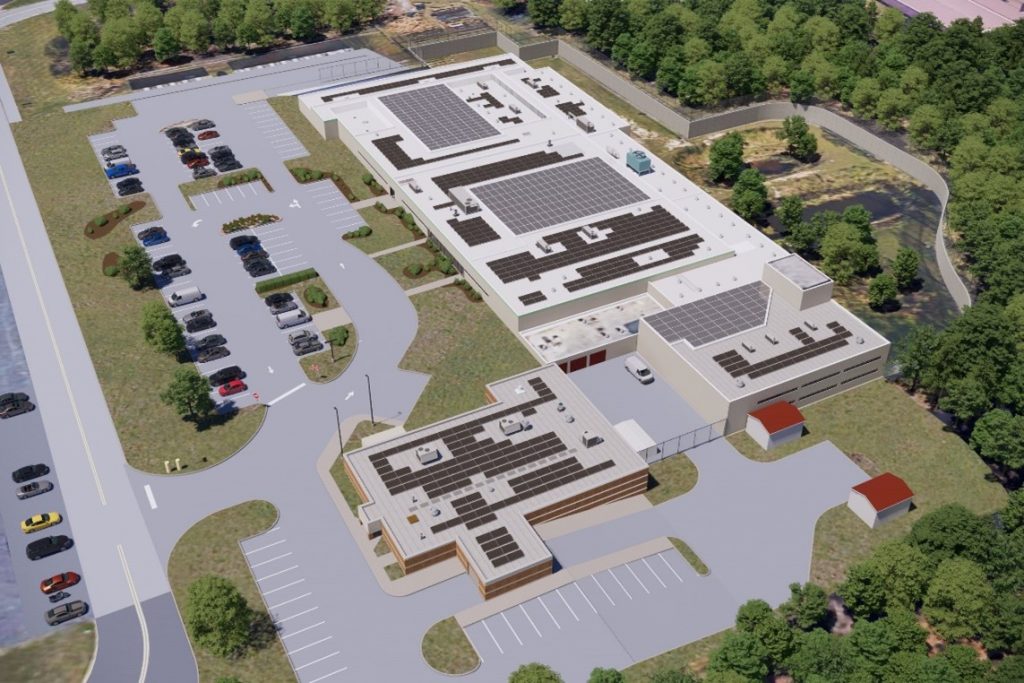 Solar panels (as depicted on the above rendering) will be added to the roof of the Howard County Detention Center in Jessup, MD.

The solar panels are expected to have a capacity of 194 kW and to generate approximately 265,000 kWh of electricity each year. The resulting clean energy from these solar panels can reduce GHG emissions equivalent to taking 25 cars off the road or planting more than 1,900 trees.

Project completion is expected in December 2022. 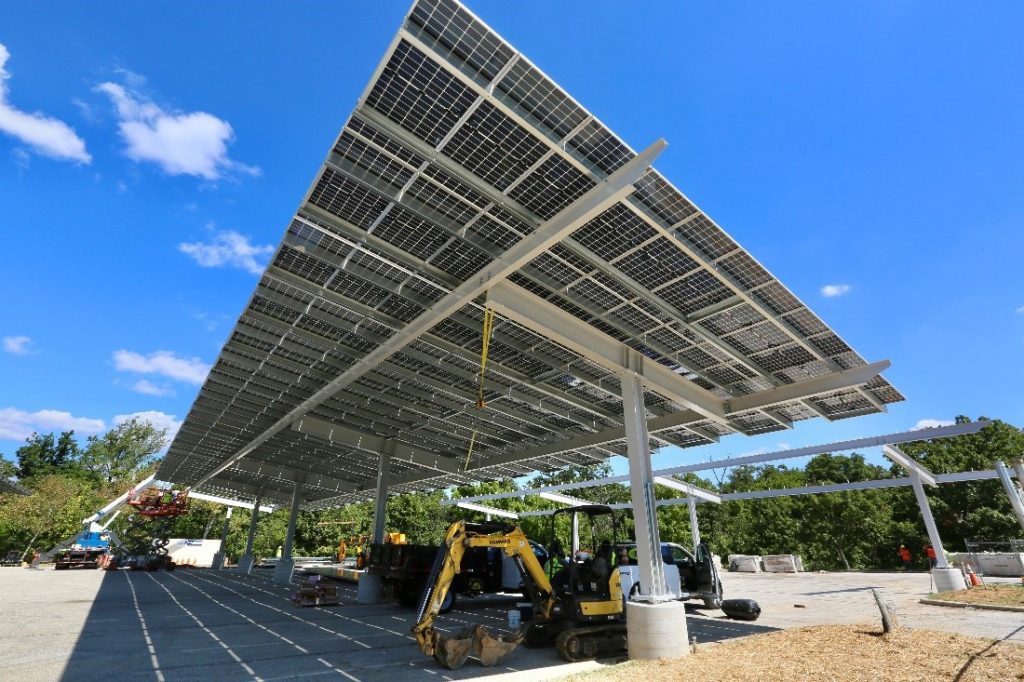 This is a rooftop and carport solar project at the Ulman Building on Columbia Gateway Drive in Columbia, MD. Electric vehicle charging stations for the public, employees and County fleet will be added to the parking lot once the canopies are complete. The solar canopies will provide shade and shelter from rain and snow. This project was made possible in part by a grant from the Maryland Energy Administration. The Ulman Building, with its Innovation Center, is the perfect location to showcase this dual use of parking lots to generate energy in addition to providing shaded space for cars.

The solar arrays are expected to generate approximately 1.1 million kWh per year of electricity. Combined the rooftop and carport arrays are 900 kW in size. These two arrays will reduce annual GHG emissions equivalent to taking 106 cars off the road or planting nearly 8,200 trees. 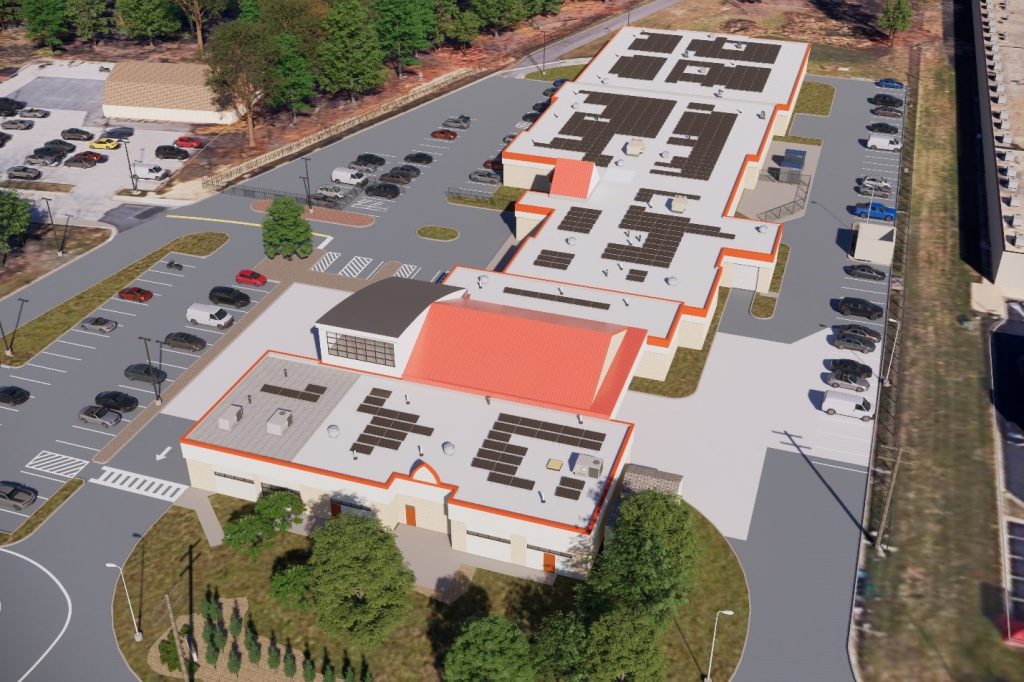 This is a rooftop project on the Scaggsville Public Safety Complex located in Scaggsville, MD. The photo above is a digital rendering showing the planned location for the panels.

The solar arrays will be 202 kW in size and will generate approximately 260,489 kWh per year of electricity. The arrays will reduce GHG emissions equivalent to taking 24 cars off the road or planting nearly 1,900 trees.

The anticipated completion date is January 2023. 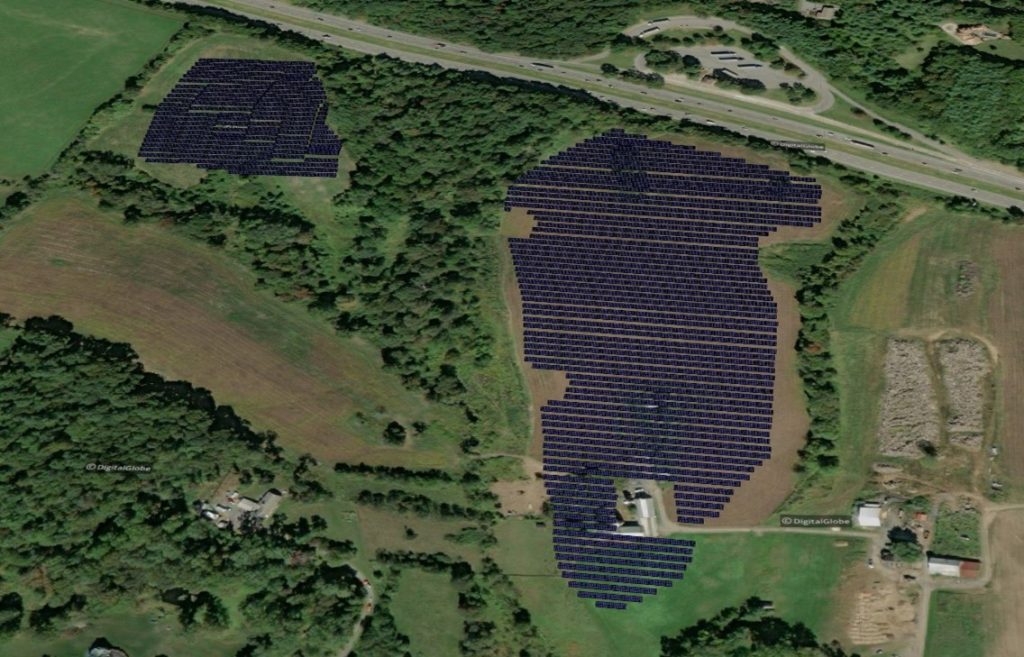 This planned solar project, shown in the rendering above, will consist of ground mount solar panels on a privately-owned site located in West Friendship, MD. To maximize agricultural value of the space, sheep grazing is planned under the panels. The sheep will have shade and excellent grazing while they keep the vegetation from shading the solar panels. Native pollinator habitat also will be planted along the perimeter of the solar arrays.

Combined the solar arrays are expected to have approximately a 12.5 MW capacity and will generate approximately 18.7 million kWh per year of electricity. The solar panels will reduce GHG emissions equivalent to taking 1,745 cars off the roof or planting 133,948 trees.

The anticipated completion date is March 2023. 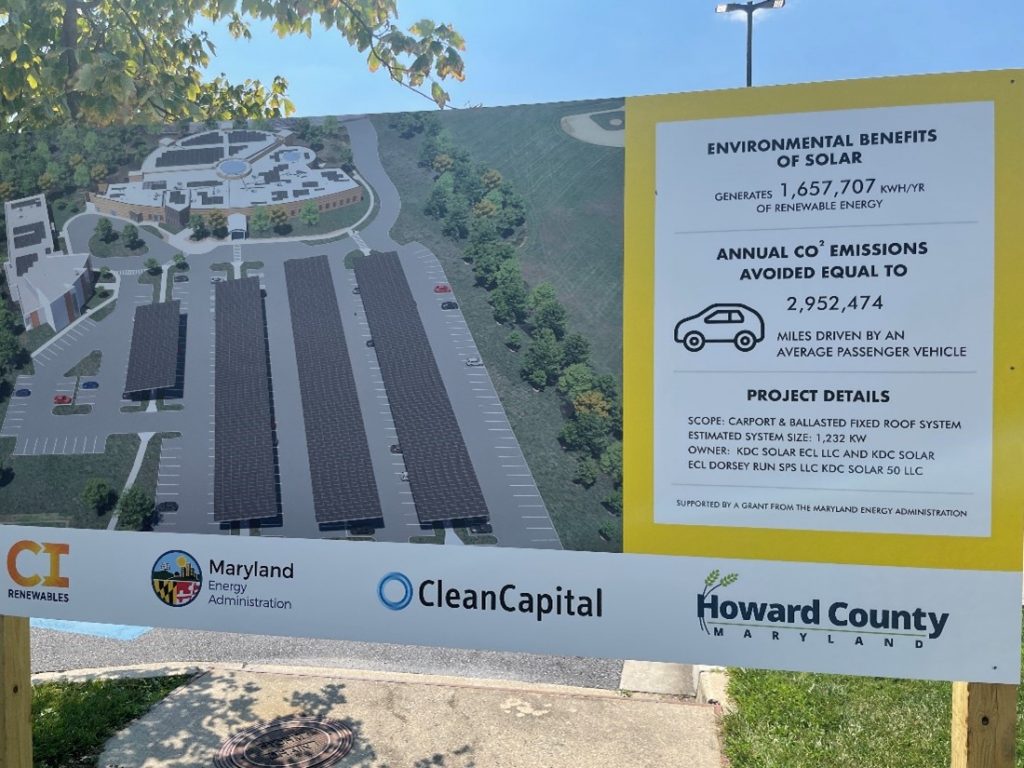 Combined the arrays are nearly 1.2 MW in size and generate approximately 1.6 million kWh of electricity each year. The annual GHG emissions will be equivalent to taking 154 cars off the road or planting nearly 11,900 trees.

The anticipated construction date is November 2022 for the library rooftop, May 2023 for the new 50+ Center, and Aug 2023 for the parking canopy.

Howard County East Columbia Branch Library already has 24 solar photovoltaic (PV) panels that were installed in 2008. That system generates an average of approximately 500 kWh a month. In the first month of operation, the solar array generated over 700 kWh of electricity, enough to power 28 average-sized Howard County homes for one day. The average American home uses 920 kWh each month.

Other Solar Projects (Outside the PPA)

Worthington Elementary School in Ellicott City receives nearly 90 percent of its electrical power from the sun. Many local partners includ­ing the County’s Department of Public Works, the Howard County Board of Education, the Maryland Energy Administration, the Northeast Maryland Waste Disposal Authority and others worked together to place about 2,000 solar panels on a former landfill next to Worthington Elementary. The students at Worthington use the solar panels as a real-life example of new technology and energy production for the future.