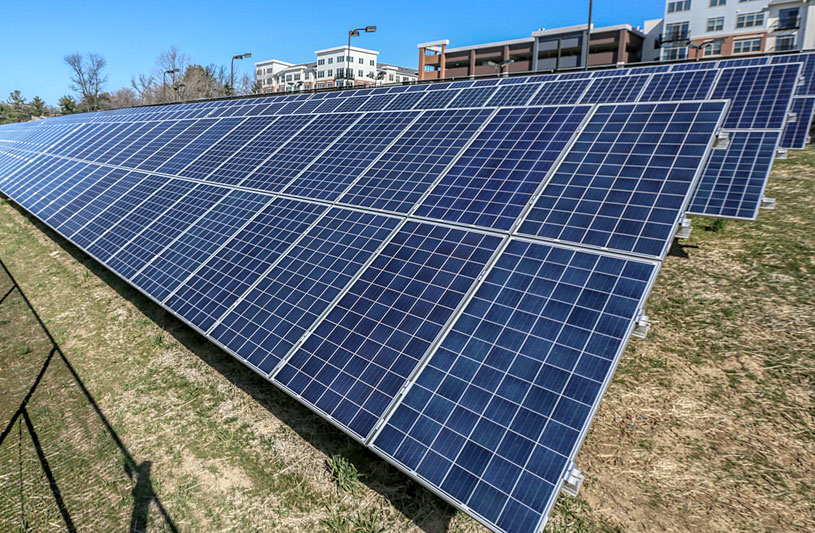 The Miller Branch Library building has solar panels as part of its overall energy-efficient and green design. Designed to achieve LEED Silver Certification from the US Green Building Council, the green design includes 72 solar panels, a passive solar design which allows ample natural lighting, highly efficient HVAC and light­ing, water conservation features and a green roof. More information about the Miller Library building is available on the hclibrary.org webpage.

Howard County Library’s East Columbia Branch has 24 solar photovoltaic (PV) panels that were installed in 2008 as part of the County’s effort to incorporate solar power into county government operations. The system generates an average of approximately 500 kWh (kilowatt hours) a month – more in the summer and less in the winter. In the first month of operation, the solar array generated over 700 kWh of electricity which is enough to power 28 average-sized Howard County homes for one day. The average American home uses 920 kWh each month.

Worthington Elementary School in Ellicott City now receives nearly 90 percent of its electrical power from the sun. Many local partners includ­ing the County’s Department of Public Works, the Howard County Board of Education, the Maryland Energy Administration, the Northeast Maryland Waste Disposal Authority and others worked together to place about 2,000 solar panels on a former landfill next to Worthington Elementary. The students at Worthington use the solar panels as a real-life example of new technology and energy production for the future.

The Solar Power Poles incorporate a GPS-based controller to follow the movement of the sun throughout the day and produce up to 30 percent more power than fixed panels. The panels, which can be retrofitted to most existing lighting poles, utilize existing wiring and require no ground space connections. Power produced from the solar panels is converted to AC power and fed back into the utility grid. 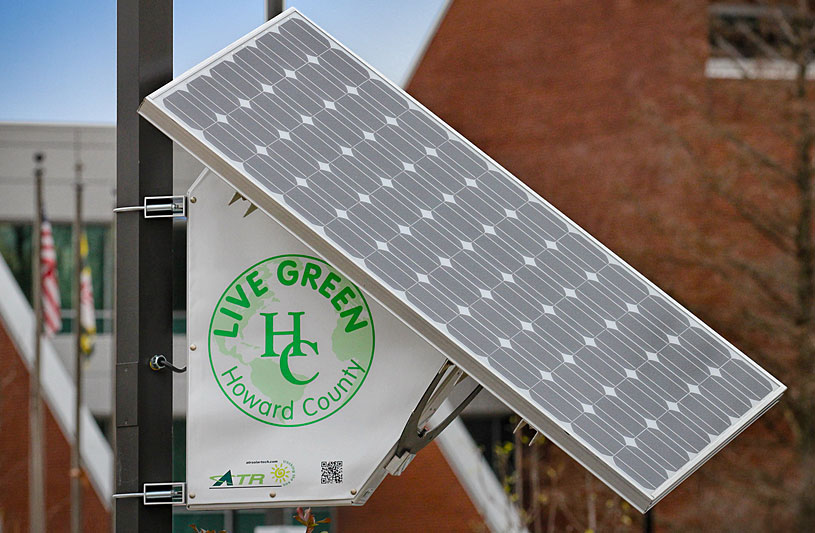 Geothermal energy, the energy stored in the earth, can be harnessed for heating buildings and water. Geothermal or ground source heat pump systems use pipes installed in the ground. Water or a mixture of water and antifreeze are circulated through the pipes to absorb heat from the surrounding soil. In hot weather, the process is reversed, cooling the house by using the ground as a heat sink.

In some areas of the USA, fields of wind power generate a lot of clean energy. In Maryland, much of the wind power discussion focuses on off-shore wind. There hasn’t been much wind power in Howard County so far. One project is the wind turbine at Ellicott Gardens

Ellicott Gardens, low-income one and two bedroom apartments owned and rented out by Howard County, were built to be energy efficient, keeping operating costs low. Completed in 2009, the apartment complex has a white roof that reflects heat, energy-saving windows and appliances, and low-flow plumbing fixtures. The main green attraction, though, is the wind turbine, that generates about 400 kwh of electricity per month.

Alpha Ridge Landfill opened in May 1980. Trash buried in a landfill generates landfill gas as it decomposes. This landfill gas, which is approximately 50% methane, can be beneficially used to generate electricity.

Residents can encourage renewable energy by purchasing it through their electric company. BGE and Potomac Edison allow you to change your energy supplier within their system. The Maryland Public Service Commission has developed a very helpful website to compare energy plans, www.mdelectricchoice.com/shop/. Have your electric bill handy – you search by energy supplier and add your energy use estimate. You can filter your search by Renewable options.

Community Solar is the newest way to purchase renewable power. It allows you to purchase a share or subscription to a local solar project. You don’t even have to own a home to participate. Anyone who pays a BGE or Pepco utility bill is eligible. To find a list of Maryland community solar projects visit the non-profit Solar United Neighbors community solar website.